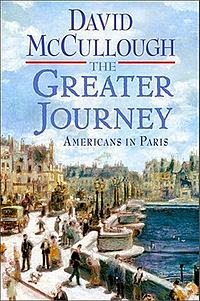 David McCullough's followup to JOHN ADAMS and 1776 -- both of which were immense best-sellers and critical favorites -- received critical hosannas which were, for the most part, deserved, but did not do nearly as well in terms of sales.  It's not hard to see why if you take a close look at McCullough's approach.  Here, he tells the story of various Americans -- writers, painters, medical students, inventors, etc. -- who traveled to, lived in, and worked in Paris during the period 1830 to 1900.  While certain figures get more time on the stage than others, so many individuals stroll past on the figurative "Champs Elysees of ideas" that the average reader probably can't be faulted for losing track of "who's who" on an occasion or two.  There's plenty of interesting and fascinating information to be found here, but be warned that considerable attention will have to be devoted to keeping one's mental "scorecard" updated.  The comparative lack of focus, culminating in an ending chapter and an epilogue that might best be described as a "fadeout" rather than a definitive conclusion, may help to explain why some readers found THE GREATER JOURNEY to be somewhat laborious going.

The Americans discussed here should not be confused with the "Lost Generation" who so famously came to Paris in the aftermath of World War I.  The earlier cohorts might be more accurately described as a "Finding Generation."  Leaving a much younger and rawer America, they sought enlightenment, polish, and education in one of the world's most cosmopolitan capitals.  Moreover, they did so without a trace of the world-weary rejection of American mores that so many members of the "Lost Generation" evinced.  The primary goal of such individuals as painter/inventor Samuel Morse, sculptor Augustus Saint-Gaudens, and medical student/writer Oliver Wendell Holmes Sr. was to use the knowledge and skills that they had gained in order to enrich their home country.  Some of them stayed in Paris for years, but they never stopped thinking of themselves as Americans first and foremost.  The interplay between the values that these individuals brought with them and the refinements that residence in Paris taught them provides much of the intellectual intrigue of the book (though, admittedly, certain figures, even some fairly famous ones, simply spend too little time in the spotlight to get full attention on that score).

Easily the most impressive part of the "bitty" narrative is the tale of Elihu Washburne, U.S. minister to France during the 1870-71 Franco-Prussian War, the subsequent siege and fall of Paris, and the short but bloody reign of the Paris Commune.  As the only diplomat from a major power to remain in Paris during the siege, Washburne did yeomanlike service in assisting stranded Americans and people of other nationalities to either escape the city or survive the effects of the siege.  This included protecting German nationals who had been trapped in the city and were in potential danger of being persecuted or killed by the locals.  McCullough makes heavy use of Washburne's diary to keep track of the day-by-day events, as well as Washburne's emotional state.  Significantly, this sequence is easily the most reminiscent of McCullough's sweeping narratives in his Revolutionary War books.

THE GREATER JOURNEY isn't McCullough at his very best, but even a McCullough at three-quarters speed beats the average ideology-bound academic historian every day of the week.  Highly recommended.
Posted by Chris Barat at 10:27 AM
Labels: Books, History, Literature, Medical, Painting