Talk about "falling out of love" with a DuckTales episode.  My opinion of "Jungle Duck" has slipped a bit over time, but my sentiments concerning "Duck to the Future" have sustained a much heavier hammer blow.  It's not that I no longer find the ep funny; it has simply become impossible to ignore what GeoX delicately termed the "extremely dumb shit" that clogs up the workings of the plot and the motivations of the characters.  Geo's lengthy exegesis actually only touches upon some of the logical sins on display.

In a sense, Ken Koonce and David Weimers make the same mistake here that they did in "Down and Out in Duckburg"; they're absolutely bound and determined to parody The Wizard of Oz (seasoned with a pinch of It's a Wonderful Life for good measure), as they were Lifestyles of the Rich and Famous in the earlier ep, and pretty much everything else gets shunted to the side in the drive to ram this through.  The damage doesn't seem quite so egregious here, given that this was an original story (albeit one stitched together from a number of different thematic sources) as opposed to an adaptation of a Barks tale, and the script generally sticks to entertainment and eschews facile moralizing, at least until the very end.  The result remains fairly watchable if you can find some way of compartmentalizing the dumbness.  Good luck with that. 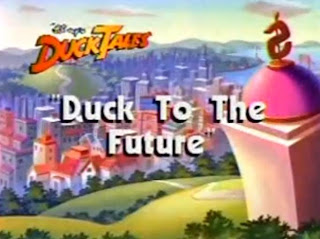 The ep opens decently enough as Scrooge gives the struggling HD&L (who, yes, really should have shown a bit more financial savvy here) what seems to be some innocuous advice.  Why the boys would extrapolate from these words a need to cheat customers with water and extort "privilege of working for us taxes" from helpers like Doofus is never adequately explained, though.  By example, if nothing else, Scrooge should have long since demonstrated to HD&L the advantages of "making it square."  I don't think that the setup here reflects the motivations of the Nephews I know, unless they suddenly decided to snap back into 1930s "Hellion" mode.  Even then, the boys' pranks and schemes were generally directed at Donald, while here, they apparently intend to rip off as many people as possible. 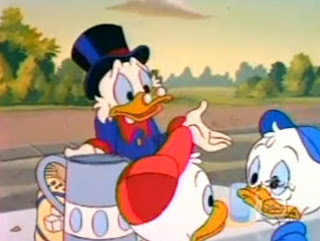 I agree with GeoX that you need to make all sorts of concessions regarding Scrooge's denseness in order to accept his falling for Magica's fortune-telling disguise and "future time-traveling subway" ruse. At least he gets his own back in his use of an equally cheesy disguise to bluff his way into Magica's throne room and snatch the dime... the continued existence of which, by the way, raises the question of whether Koonce and Weimers were fully aware of the fiery fate that Magica always intended for the Old #1 Dime once she got her mitts on it.  This oversight is especially odd in light of the fact that K&W wrote the teleplay for "Send in the Clones," which DID get the logistics of the dime disposal correct.  It could be that K&W simply transcribed Astrid Ryterband's story without fully picking up on the legitimacy of the dime-melting business, which was included there, but then floundered a bit when they decided to write Magica from scratch themselves.  The DT Show Bible doesn't specifically reference Magica's desire to use the dime in an amulet, instead describing the coin as a "talisman," so it wouldn't necessarily have given K&W much assistance. 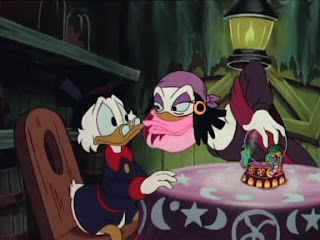 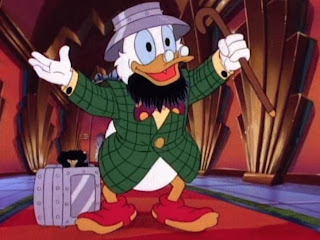 So what happened to turn the mature HD&L into overweight corporate vultures who are willingly working for Magica?  Aside from the suggestion that "it all started" with the boys' completely overblown reaction to Scrooge's words of financial wisdom, we never do get a satisfactory explanation.  I mean, HD&L really should have started asking some very pointed questions way back when after Scrooge vanished and Magica "got his #1 Dime" at the exact same time.  Wouldn't the thought of foul play or chicanery at least have brushed up against the brains of the younger, and certainly less corrupted, Nephews?  And when did HD&L actually start working for Magica?  Was it right away, or did their moral sense have to be dulled sufficiently in order to accept the gig? K&W don't seem particularly interested in completing the circle, and it definitely detracts from the believability of what is already a highly far-fetched plot. 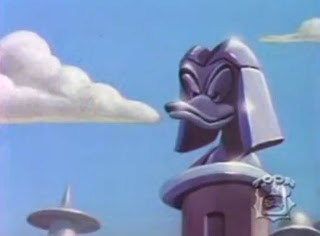 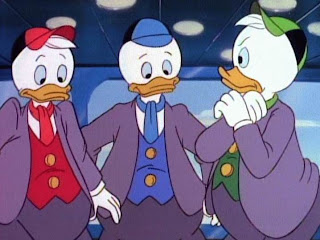 K&W also don't make it clear how far the tentacles of "Magica-McDuck Enterprises" extend.  No reference is ever made to the Future World outside Future Duckburg; all we know is that Magica & co. have a free hand to charge whatever they want to inside the city limits... which leads to an obvious question, namely, why haven't more citizens moved away from Duckburg as a result?  We still see plenty of citizens on the streets and in the subways.  So perhaps "Magica-McDuck Enterprises" DOES control a good chunk of the world.

The middle game of the episode provides us with some of the ep's funniest and (on occasion) thought-provoking moments, mostly having to do with the future fates of other DT cast members.  Gyro and Launchpad are pretty much as one would expect they would be, with the former desperately clutching his last few marbles and the latter using his "crash course" as an excuse to maunder on about his glorious (or not) past.  (I wonder what sort of "homework" LP assigns in that course.  It's probably best that we never do find out.)  The Webby-Doofus pairing is anything but boring, I'd say.  For one thing, Doofus deserves a fair amount of credit for sticking to the Junior Woodchuck last; he's probably an officer by this time, and on merit, unlike the younger Doofus whom Vic Lockman thought had to be a troop leader because he was bigger than the Nephews.  I think it is safe to say that HD&L have not kept up their JW memberships as Doofus has.  Then, too, Webby appears to have suddenly sprouted a glorious head of blond hair, and her boots are very chic, a definite improvement on standard female-Duck footwear.  Mrs. Beakley and Duckworth don't appear; either they have moved away in despair or (sadly more likely) have passed away by this time. 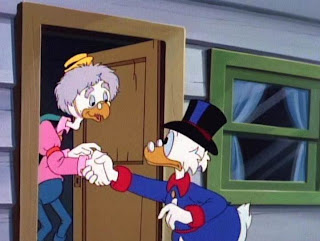 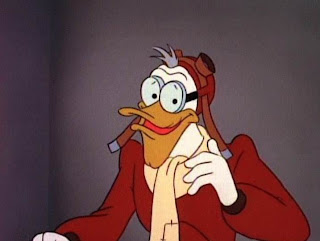 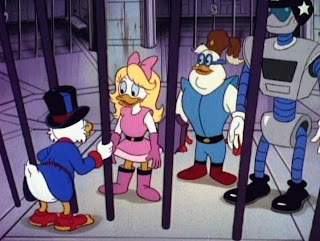 The end of Act 2 and the start of Act 3 thrust us into "Duckburg-Oz" with a vengeance.  In speedy succession, we get the parody of the door-guard who greets Dorothy and the rest at the entrance to the Emerald City, the "throne room/disembodied head of Magica" scene, and the "O-E-O" marching-soldiers business (though without the verbal accompaniment -- I wonder whether some copyright issue was involved).  It all works reasonably well, and I found Alan Young's imitation of an American accent to be particularly ingenious.  We know from Mr. Ed (not to mention the second-season DT ep "Blue Collar Scrooge") that Young has a perfectly good American accent, but here, he voices the accent as though a Scot like Scrooge really were performing it.  That's got to be considerably harder to do. 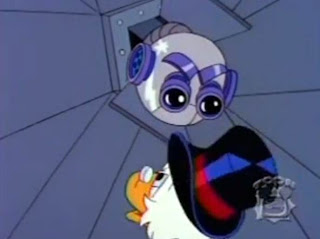 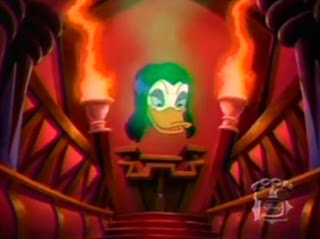 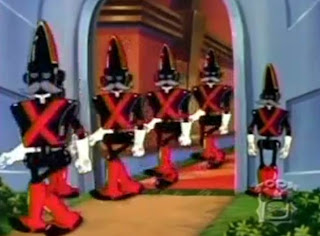 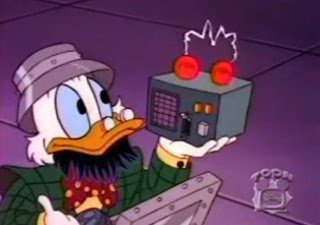 Scrooge and Magica's trip back through time opens the trap door to an obvious paradox (in Pan Milus' words: Scrooge goes to the future and takes the future Magica to present... So aren't there two Magicas now?) and probably lasts one time-stop too many (I'm cool with cutting the Custer's Last Stand bit).  Still, it's positively artful compared to Scrooge's last little speech (the one after Magica has inexplicably given up the fight, turned tailfeathers, and poofed away).  "Making money at the expense of others is no bargain" rings false even if you're a staunch believer in capitalism.  Every business transaction involves "making money from others" to one extent or another.  "Making money unfairly at the expense of others..." would have gotten the true point across with minimal damage to all parties. 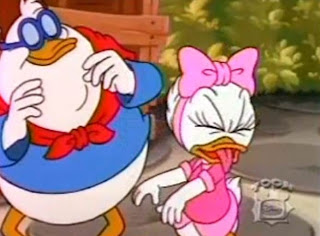 I think that "Duck to the Future" would have been an excellent candidate for a multi-part story.  There simply isn't enough time to flesh out all the implications of Magica's takeover and the impact that it has on the characters.  Multiple parts would have permitted Koonce and Wiemers to have their Oz parody and a sturdier adventure as well.  As it stands, what we got was adequate at best and frustrating at worst.

(GeoX) And as far as dumb shit goes, how 'bout the idea that "payday's the day we turn our earnings back over to the bosses," due to the "Privilege-of-Working-for-Magica-McDuck-Enterprises Tax?" I mean, yeah, I know, you want to show how greedy and EEEE-vil Magica is, but surely there has to be a less nonsensical way to do this.

Especially since it doesn't address the question of how Magica-McDuck's employees could continue to live lives without income.  Perhaps working for the company is like being in the ultimate welfare state -- everything is paid for but the effective "tax rate" is 100%.

(Greg) [T]he secretary tells him about turning earning over to the boss for the work of the Enterprises tax. Then her intercom buzzes and she goes over to the screen intercom and switches it on and there is an older Huey (slightly weird hairstyle, black suit, red tie; but same baseball cap.) as he addresses her as Miss Woods. Interesting this Chris Barat missed that one as Huey wants lunch.

Could this be a reference to Rose Mary Woods, Richard Nixon's secretary?  After the "Ronnie" reference in "The Right Duck," it sure wouldn't surprise me.

(Greg) We go to the cockpit as Magica demands Scrooge give back his lucky [dime]. UH OH! Remember the nephews don't KNOW that is Scrooge? See if Scrooge had revealed himself earlier; the nephews might have considered what they did earlier. Louie is piloting of course as Huey asks if she said Scrooge. Don't answer him Magica.... Louie wonders how he disappeared 40 years ago and Magica reveals the time sands to force the point. More shooting from outside as Magica proclaims that she is going to use it again to make him disappear for good this time.

Of course, there's no guarantee that HD&L would have believed Scrooge's claim to be Scrooge earlier, especially given their warped state of mind by this time.  They had to hear the truth straight from the sorceress' mouth, as it were.

Time for a Multicultural Moment!  A compilation of the DT theme song pieced together from various languages.

Ah yes! Thank you for reminding me another thing I found painfully distracting about this episode.
In "Send in the clones" and "Dimes enough for luck" Magica talk about MELTING the dime... So how the heck Scrooge just pull the dime out of her amulet?

From what I recall they also never shown was Magica "behind the curtain" or was she trully turn into the gigantic head when she had the amulet?


I 100% agre that this episode would made way better two-parter. It would be fun if they would shown fate of Glomgold. With no Scrooge his like Joker without Batman... (But then agian his propably dead at this point)


P.S.
No Polish in the multileangue version? DAAAAAAAAAMN :(

Like "Down and Out in Duckburg", this episode is a prime example of Koonce & Weimers starting with a decent premise (in this case, "What if Magica actually got Scrooge's dime?"), then abandoning it to indulge in a pop culture parody.

The best way to explain this time travel adventure would be that it happened in "Dreamtime", since Magica uses SAND and not a PORTAL into a time TUNNEL, which is the REAL way time travellers travel. ;)