I got the new DuckTales: The Movie DVD in the mail this afternoon, and the very first thing that struck me was how appallingly small-timey it looked.  The artwork for the sleeve of the VHS release, while nowhere close to the quality of the original DT:TM theatrical poster, was appealingly dynamic, with an appropriately menacing background hint as to the villainous nature of the main antagonist: 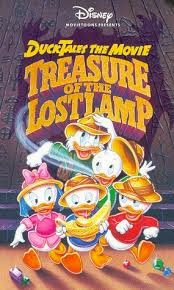 The "Disney Club exclusive" DVD release gave us the poster itself, or, at least, a generous hunk of same: 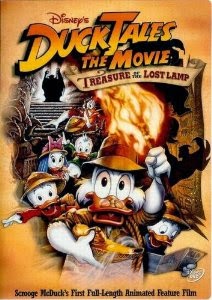 The new DVD case, by contrast, places us in the middle of a field of "posies" (Webby actually looks like she's praying, there) and shunts the Merlock shadow off to the side, where its impact is far less and it is also slightly more difficult to see.  Of course, the Genie didn't appear until long after the Ducks had returned to Duckburg... and since when did he lack feet?  I'm getting some unsettling flashbacks of the live-action Casper movie right now. 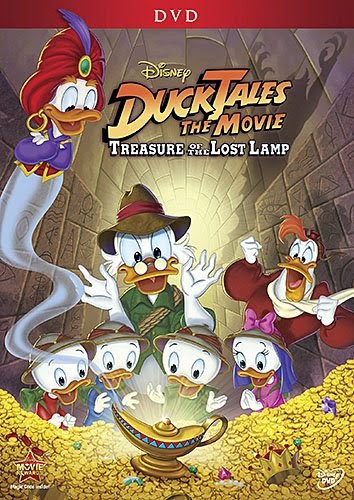 In an era in which Disney DVD trumpets releases (or, in some cases, re-releases) of its theatrical features with various metallic superlatives (Silver Edition, Golden Edition, Platinum Edition, etc.), what does it say about its attitude towards this release that it is simply designated as "DVD"?  From a modern video-marketing perspective, this is the equivalent of Pathmark's "No Frills" packaging of the 1970 and 1980s.  Actually, Disney DVD's labeling is the more redundant.  Pathmark had to let you know what was inside those starkly designed cans and bottles, whereas any fool who saw the DT:TM DVD sitting on a shelf along with a bunch of other DVDs could certainly be expected to deduce that it WAS, in fact, a DVD. 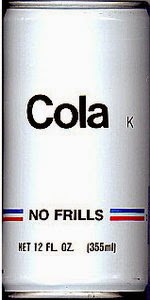 To be completely fair, there IS an "extra" included on the disc: a "Find Scrooge McDuck's Treasure" game.  Even this, however, seems to have simply been imported from the Disney Movie Club release.

At least I've got a DVD of this thing at long last, without having to join a "club."  That modest accomplishment will have to be sufficient, however.
Posted by Chris Barat at 7:41 PM
Labels: Animation, Disney Afternoon, DuckTales, Movies

You write: “Pathmark had to let you know what was inside those starkly designed cans and bottles, whereas any fool who saw the DT:TM DVD sitting on a shelf along with a bunch of other DVDs could certainly be expected to deduce that it WAS, in fact, a DVD.”

Far be it from me to even attempt to defend Disney on such matters, but perhaps they were attempting to differentiate it from its non-existent Blu-ray release. Naaaah! It’s just poor packaging.

And need I even link to my related TALE SPIN posts HERE – and HERE ?

Nice coincidence in posting! Combined, they tell quite the story about Disney’s treatment of these properties. I’ll have to pick up that self-described “DVD”.

I'm shock non of the covers or even the poster include Dijon. For me his the most memorable character of the movie.