Like IDW's ongoing DICK TRACY reprint project and Fantagraphics' THE COMPLETE PEANUTS series, IDW's exhaustive cataloging of the adventures of America's favorite orphan (now there's an ironic turn of phrase...) bids fair to be on my "pull" list (or, in this case, my "pick up gingerly and deposit the large item carefully into the box" list) for a long time to come, economic vagaries permitting. It may even top those fine efforts, since it enjoys the added feature of a legitimately interesting and challenging series of essays by comics scholar Jeet Heer that, when they are finally fully compiled, should shake up a lot of what comics fans think they know about Annie's creator, Harold Gray, and the singular worldview that informed his work from day one.

This first volume reprints daily strips from Annie's debut in August 1924 through October 1927, plus a handful of Sunday pages. (Most of Gray's Sundays during this period were standalone gags; the editors reprint a few of these, plus a handful that actually tie in with the ongoing daily narrative.) For those, like me, who got most of their previous exposure to Gray's spunky, two-fisted waif from the massive Arlington House volume that only reprinted strips from the period 1935-1945, Gray's earliest strips will seem crudely over-elaborate, the work of a modestly talented artist trying to distinguish himself from the style of his ex-boss Sidney Smith (whom Gray assisted on THE GUMPS) by punching above his weight. It doesn't take long, however, for Gray's "natural" style to reveal itself. The cycle of "hard-knocks adventures among the common folk" linked to brief but memorable reunions with Daddy Warbucks, the clipped sentences, the occasional "pause and reflect" strips, and the fourth-panel philosophical ruminations manifest themselves with similar swiftness. So, too, do Gray's odd touches of amoralism. We're still some time away from the introduction of Warbucks' notorious sidekicks Punjab and The Asp, but this somewhat less sinister Warbucks is still capable of using two toughs to "encourage" a French doctor to leave his cushy practice and come to America to fix Annie's paralyzed legs. Likewise, Warbucks' snooty wife, who'd earlier treated Annie like dirt and abandoned her husband to take up with a suave European swindler, returns to the storyline poorer but wiser and genuinely contrite -- she even looks like a nicer person, facially speaking -- but no sooner has she reformed than she's disposed of through the impersonal medium of a storm at sea that swamps the Warbucks yacht.

Oddly, when they first meet, Annie has better diction and grammar than Warbucks, the self-made war profiteer who's initially characterized as a diamond in "rough" of razor-wire consistency. As time passes, however, Daddy acquires polish, while Annie begins dropping her "g"s with regularity and otherwise using the lower-middle-class style of speech that she'll employ for the rest of her career. Both Annie and Warbucks are obviously great, sympathetic characters from the first moment, and I'm perfectly willing to amend my well-known affection for "feisty young male characters" and invite Annie to join the club. (She can room with Darkwing Duck's Gosalyn Mallard, a very similar character -- to state the glaringly obvious.) Aside from these two, Annie's dog Sandy -- who debuts as a puppy (!) and undergoes a rather dramatic "ear-bob" during his physical development as an adult -- and the Silos (the kindly farmers who are the first of many strangers to take in the Warbucks-less Annie), the ANNIE cast at this stage is still pretty skimpy. Give Gray time, however.

Heer's essay on Gray's youth and early work argues convincingly that Gray, at least at this stage of his career, was far more of a "progressive" Republican than the later hard-shell guy who despised FDR. He overstates his case in places, but, more importantly, he makes clear why Gray was so opposed to the New Deal later on. If Gray hated anything, it was hypocrisy, pretense, and putting on airs; the quintessential Gray walk-on character, the neighborhood busybody, is very much in evidence from the start of ANNIE. Rather like H.L. Mencken, Gray hated FDR as the consummate pretender who purported to serve the common man by in effect buying his vote through a national elaboration of the old-fashioned ward boss strategy. (The pork-laden "stimulus package" passed a few days ago is merely an updated version of this strategy, of course.) Since Gray was among the most sincere and least ironic of comics creators, his rage was fueled by a genuine sense of disillusionment. Like Charles Dickens (to whom Heet compares Gray in the intro to Volume 2), Gray believed that reform began not with the stroke of a bureaucrat's pen but with a change of heart. Unfortunately, Gray's very sincerity led directly to his greatest failing, a lack of humor. There are a number of slapstick gags in the early strips, and Annie occasionally serves as her own worst enemy by committing such small-beer sins as eating too many bananas, but the laughs get fewer and farther between as the strip moves forward. Well, at least Gray knew what his strengths were.

I should be getting on to Volume 2 soon. These are DEFINITE keepers.
Posted by Chris Barat at 7:10 PM No comments:
Labels: Animation, Books, Comic Strips, Darkwing Duck, Disney Afternoon, Little Orphan Annie, The Gumps

No Fan is a (Fantasy) Island 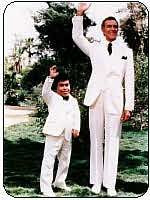 The recent passing of Ricardo Montalban -- and a nugget of info about the man that I gleaned from NATIONAL REVIEW ONLINE -- completed a most astonishing "daily double" of sorts for me. According to the NR piece, Montalban -- whose wonderful turn as the Kim Possible villain Senor Senior Senior meant far more to me, in a fannish sense, than any appearance as a eugenic superman and would-be world dictator or shill for cars with "Corinthian leather" ever will -- was a longtime supporter of NATIONAL REVIEW and even did subscription promotions for the magazine. So what, you say. Well, this comes on the heels of learning that, prior to hitting it big in the role of Christopher Lee's sidekick Nick Nack in the James Bond film The Man with the Golden Gun, Herve Villechaize spent a period of time in the early 1970s doing inking for, would you believe, Harvey Comics. (No, I'm not able to definitely recognize his work, though some of the RICHIE RICH stories of the period feature unpleasantly "thin" inking that is unlike any other inking ever done on the character. The fact that this individual was apparently employed for only a short time -- and the additional fact that Villechaize is known to have worked for Harvey for only a couple of months -- suggests that this unusual inking might actually be Villechaize's work.)

Two of my personal interests -- conservatism and Harvey Comics -- bound together in this unlikely duo. Ain't fandom great?

Not much happening of late. Gemstone Comics has pitched into another "hiatus" so it may be a while before my next comics review. I'm going to do a post soon on my participation in the recent Harvey Comics panel at the Museum of Comic and Cartoon Art in NYC, but I'm waiting for my friend Mark Arnold to provide me with some pictures. Stay frosty (as if that's not easy to do this time of year!) and I'll resume activity soon.
Posted by Chris Barat at 9:01 PM 1 comment:
Labels: Disney comics, General Comics

Not many comics to review of late, and the "grind" has begun again in earnest, but I have to pay tribute to the Eagles' return to the NFC championship game. Given life by some fortunate results on the last weekend of the season, they've taken full advantage. Not sure if they can make it three straight road wins, but, with the Phillies having busted that maddening "curse of Billy Penn," at least the "weight of expectations" has lessened considerably.

In preparation for the NFC title clash, here's a link to a blast from the past: Wilbert Montgomery's TD run vs. Dallas in the 1980 NFC championship game vs. the Cowboys. I watched this live! (At home on TV, I should say, not at Vet Stadium.)
Posted by Chris Barat at 9:09 PM No comments:
Labels: Football, Philadelphia Eagles

Along with a memorable explosion of imagination and creativity, the "Silver Age of Comics" gave rise to many, many strange creations -- campy superheroes shouting battle cries of "Scoobie-Doo!" and the like. HERBIE, the cracked creation of American Comics Group editor and writer Richard E. Hughes and artist Ogden Whitney, just may be the weirdest of them all. Yes, even weirder than the "Scoobie-Doo!" guys. As someone who has a certain fascination for offbeat comics, I decided to buy the first two volumes of Dark Horse's hardcover HERBIE ARCHIVES collection, which will reprint all the adventures from Herbie's brief career. I found that I thoroughly enjoyed reading these comics -- though I discovered that other critics' evaluations of the comics' strangeness level actually understated said level. 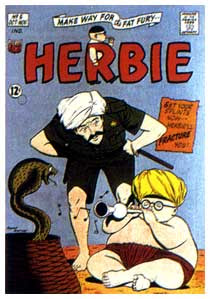 In a warped sort of way, Herbie Popnecker, a.k.a. "The Fat Fury," reminds me a little bit of Disney's Kim Possible. Like Kim, Herbie is a kid who leads a "double life" -- in this case, as a supposed "little fat nothing" who, in fact, possesses powers that appear to be limitless. UNlike Kim, whose status as a crimefighter was known to her parents and a number of other people, Herbie does his deeds without his clueless parents suspecting a thing. Indeed, his fat-headed pop Pincus (who at least had the sense to give his son a name far more prosaic than his own) constantly criticizes his obese, bespectacled offspring as an embarrassment to the Popnecker name and a hopeless ne'er-do-well. How, then, can Herbie possibly walk through the air (that's right -- walk, not fly), time-travel, talk with animals, reduce women to puddles of goo, and be well known to 1960s celebrities and such past paladins as George Washington -- with all of his abilities apparently being "powered" by lollipops? No, Hughes and Whitney did not provide an origin story for all of this. How could they have?

It is instructive to compare Hughes' creation to those masterminded by two other "Silver Age" greats, Julius Schwartz and Stan Lee. All three men had very definitive responses to the challenge of making "heroic" comic books more appealing. Schwartz emphasized slick graphics and elaborate scientific and quasi-scientific bases for his heroes' powers and stories. Lee created the whole genre of "superheroes with problems." And Hughes... well, Hughes took the whole notion of a "comic-book hero" to its logical, absurd extreme. Herbie, who (after an early interval of lucidity) tends to speak in clipped sentence fragments, is so inscrutable as to automatically qualify for Chinese citizenship, and Whitney's extremely realistic artwork further promotes the image of a big, elaborate joke being played on the baffled reader. Oddly enough, the least effective HERBIE stories are those in which he dons a more-or-less conventional superhero costume and assumes the guise of "The Fat Fury." As such, he does little that he couldn't otherwise have done in his standard garb of white shirt, black tie, and belly-strained blue pants. (In his introduction to Volume 2, Jim Valentino [SHADOWHAWK, NORMALMAN] makes the opposite argument, claiming that the "normal" Herbie wasn't funny but "The Fat Fury" was.) I assume that Hughes, whose comics line specialized in sci-fi and horror material, felt some pressure to link Herbie to what passed for ACG's line of costumed heroes and finally relented. If so, it marks the only time that Hughes followed the crowd. Otherwise, he seemed perfectly content to let Herbie handle story situations himself, and, by that, I literally mean that Hughes essentially let "what would Herbie do?" drive his plots.

This is funny, funny stuff and well worth collecting if you're interested in comics off the beaten track.
Posted by Chris Barat at 7:13 PM 1 comment:
Labels: Books, General Comics, Kim Possible
Newer Posts Older Posts Home
Subscribe to: Posts (Atom)