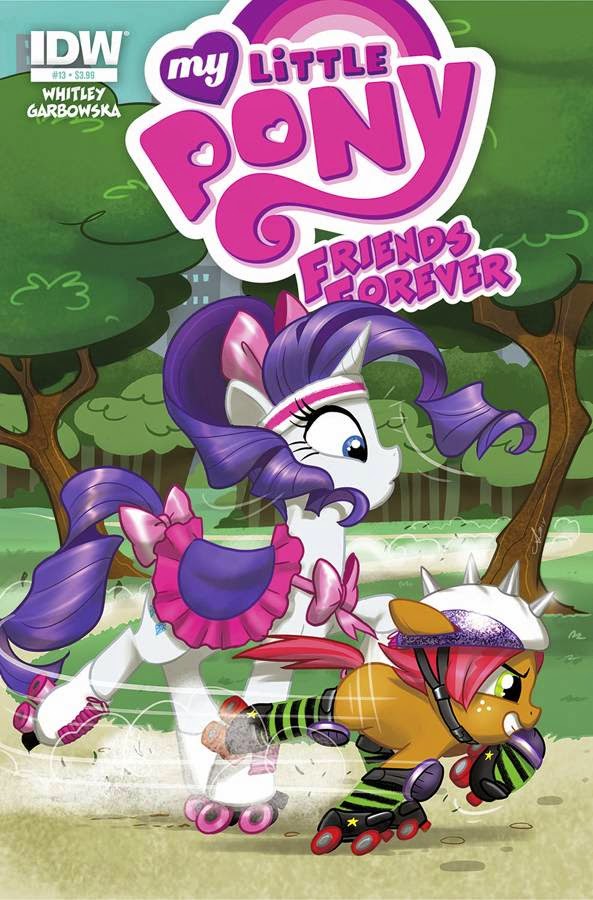 To date, IDW's MY LITTLE PONY comics have done reasonably well by a number of characters who have either been undeveloped or underdeveloped in the TV series... which is why I was particularly interested in seeing what Jeremy Whitley and Agnes Garbowska would do with the second four-color coming of Babs Seed.  Babs' first comics appearance, in MLP #21-22, pushed her characterization a considerable distance down the track, but it also may have taken a few too many liberties in its sudden expansion of Babs' problem-solving abilities.  For Babs to progress from the somewhat insecure filly that lay underneath the "bully" surface in "One Bad Apple" to the hard-boiled junior detective who cracked the "Manehattan Mystery" and cleared Trixie's "good mane" (such as it is) required a certain suspension of disbelief.  Happily, the Babs of FF #13 is back to being a little more of a passive, slightly bewildered character -- though not incapable of taking a stand when she has to -- and thus works quite well with the self-confident Rarity.  Though the plot owes more than a small debt to the classic episode "Sisterhooves Social," with Rarity learning yet another lesson about the importance of "give and take" in dealing with a young'un, the conflict simmers at a much lower temperature, and Rarity doesn't have to go to such extreme lengths in order to put what she has learned into practice.

Thanks to a thimbleful of contrivance -- namely, Sweetie Belle getting sick and being unable to accompany her sister on a business trip to Manehattan, where Sweetie was looking forward to reconnecting with Babs -- Rarity finds herself shepherding Babs around the town.  (Rarity momentarily, and self-consciously, puts aside some impending work in order to do so, in order that Babs will not leave disappointed because of Sweetie's absence.  Considering that Rarity barely knows Babs, this is a subtle but welcome reminder of her generous nature.)  Regarding Babs as a sort of equina rasa on which to work her fashionista magic, Rarity is soon consumed with the notion of giving Babs a makeover.  Babs becomes less and less enamored with the idea and finally takes her leave, albeit with no histrionics.  It's pretty clear that Babs likes Rarity well enough; she just doesn't think that their lives have very much in common. Thanks to a talk with her client, the "Pony of Pop" Sapphire Shores, Rarity quickly realizes that she's been too concerned with "her own fashion and sense of style" to pay sufficient attention to Babs' more rough-hewn, "citified" idea of a good time.  She uses her behind-the-scenes pull to treat Babs to a roller derby (hence the cover), and the two finally bond.

Simple, but effective, this is.  I suppose that I should be annoyed that Rarity didn't completely internalize her epiphany in "Sisterhooves Social," but dealing with a sibling and dealing with a relative stranger involve very different emotional dynamics.  Rarity is more puzzled than emotionally distraught as a result of Babs' unenthusiastic reaction to the makeover, but, true to her nature, she is determined to do right by Babs, and she ultimately does so.

Agnes Garbowska manipulates her static little dolls to pretty good effect here, though there are a couple of places in which a little artistic dynamism would definitely have helped.  I can only imagine what one of the more daring MLP artists would have done with the roller-derby action sequences, or with the obsessed manedresser pony who is bound and determined to cut off Babs' long bang (the one that Babs is seen repeatedly blowing out of her eyes).  There are also a few flareups of the seemingly inevitable "Repetitive Panel Syndrome."  I did, however, like the running gag of Babs being "pulled off panel" by an overly excited Rarity.  Needless to say, Babs gets to turn the tables before all is said and done.

The same creative crew will be handling FF #14, which will feature a teamup of Spike and Princess Luna.  There's a pleasing consistency in this, in that Garbowska also drew the Spike-Celestia joint in FF #3.  I'm hoping for livelier things from the Spike-Luna pairing, and at least one of the issue's covers -- which appears to be, of all things, a "hardboiled detective" parody of the "then, the tall, dark knockout of an alicorn sauntered into my office" variety -- suggests that I may get my wish.
Posted by Chris Barat at 8:39 PM
Labels: Animation, General Comics, MLP:FIM