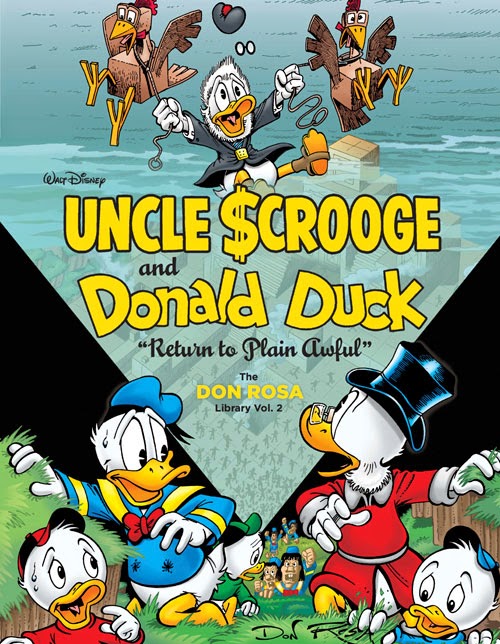 The "challenging" years of 1988-1990 found Don Rosa slowly and laboriously polishing his craft while coping with various physical, financial, and corporate roadblocks that, at times, threatened to choke off his fledgling Duck comics career.  The fact that Rosa persevered through it all and managed to "come out the other side" in more or less one piece is certainly to his credit... and, intriguingly enough, just as some of Carl Barks' greatest stories were produced at a time when his life seemed to be coming apart, so too were several of Rosa's best-loved (yep, even to this day) tales crafted during his own "time of troubles."

Fittingly, taking pride of place on the cover is Rosa's first "formal" sequel to a Barks story, "Return to Plain Awful" (Gladstone DONALD DUCK ADVENTURES #12, May 1989).  In retrospect, Rosa did two very clever things in this story that lifted it above the status of a straightforward "Lost in the Andes" followup.  He hooked the tale, to as large an extent as possible, to events he himself had previously detailed in "Son of the Sun," and he explored the logical consequences of the Ducks' visit to the isolated Peruvian valley, reasoning that Donald and HD&L would have had as big an impact on the Plain Awfultonians' lives and habits as did the famed "Professah Rhutt Betlah." 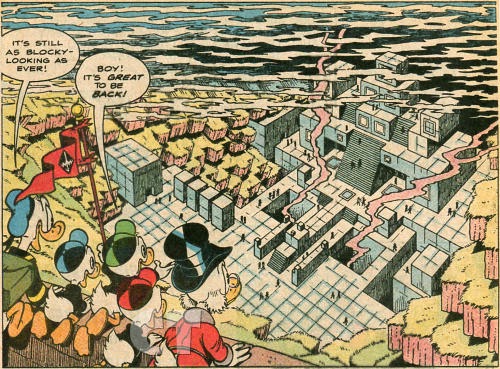 As enjoyable as "Return" is, and continues to be, "His Majesty McDuck" (Gladstone UNCLE $CROOGE ADVENTURES #14, August 1989) is the more substantial and successful epic, one that still shows up on most everyone's "short lists" of the best Rosa adventures.  Certainly, its portrayal of Scrooge is far more nuanced than the one seen in "Return," in which, let us not forget, Scrooge is left to fume about the Plain Awfultonians' annoyingly "pure and untainted spirit" together with Flintheart Glomgold, the putative villain of the piece.  If anything, Scrooge starts "Majesty" in an even deeper moral hole, kvetching over giving his freezing employees a stick of wood or two for the Money Bin office's outdated wood stove.  He proceeds to burrow even deeper when he discovers an ingenious legal-historical loophole that allows him to set up his Money Bin and surrounding property as an independent country -- and demand billions in back taxes from the U.S. and Duckburgian governments as a result.  But, it is what Scrooge decides to do after he discovers the drawbacks of being a postage-stamp king that truly packs the punch here.  It's nothing less than the modern-day equivalent of the memorable last page of "Back to the Klondike"... and any time you can fairly compare a $CROOGE story to "Klondike" without making a stretch, you know that you're dealing with one heck of an effort.  The humor in "Majesty" is also top-notch at all levels, from the expected slapstick gags when the Beagle Boys try to invade "Unca King Scrooge"'s domain to the subtle dig at the pretensions of historical societies (i.e., the funny contrast between the hushed reverence at the Friends of Cornelius Coot Library and the semi-literate nature of the Coot documents that are housed in such forbidding splendor there). 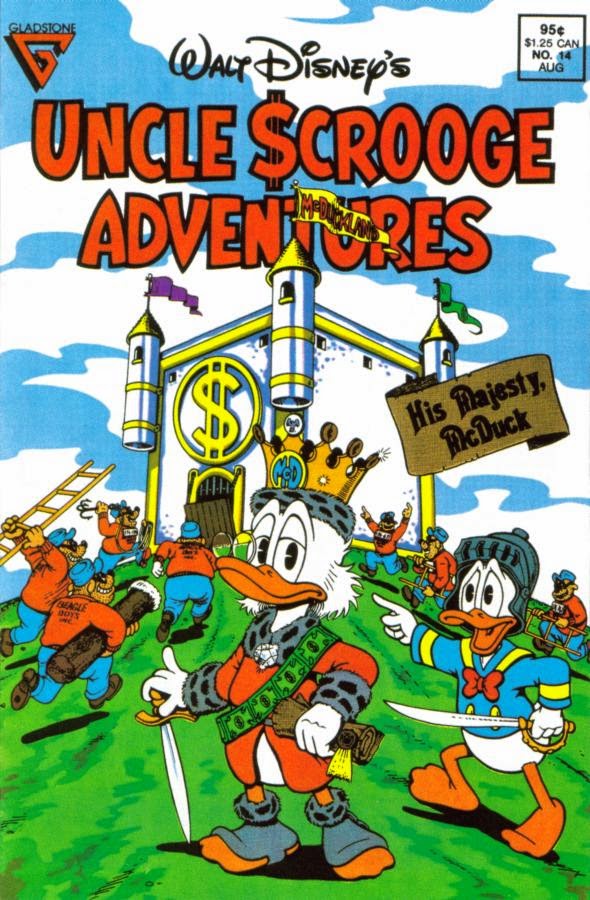 Disney's 1988 directive to forbid the freelancing Rosa from getting back his original artwork was a powerful motivational force for a good deal of the work reprinted here.  Thankfully, Rosa's description of the decision isn't nearly as splenetic as I had feared; the passage of time has evidently cooled his temper considerably.  Instead, he spends more time simply describing the numerous ways in which he tried to supplement his suddenly lessened income.  This included illustrating other writers' scripts for the Dutch Disney publisher Oberon, writing a DuckTales story (which he dismisses with bothersome, but admittedly justified, condescension) for the DUCKTALES MAGAZINE, creating a "storyboard" for a special Duck story (which ultimately never appeared) for a Disney-MGM Studios theme park tie-in, and writing several scripts (with copious borrowings from Barks mixed in) for WDTVA's TaleSpin.  Personally, I'm sorry that Rosa never evinced interest in writing for DuckTales the TV series -- at least, not until after the show was out of production -- but, given his jaundiced view of the whole enterprise, it was probably better that his TV writing gig turned out to be for an entirely different WDTVA production. 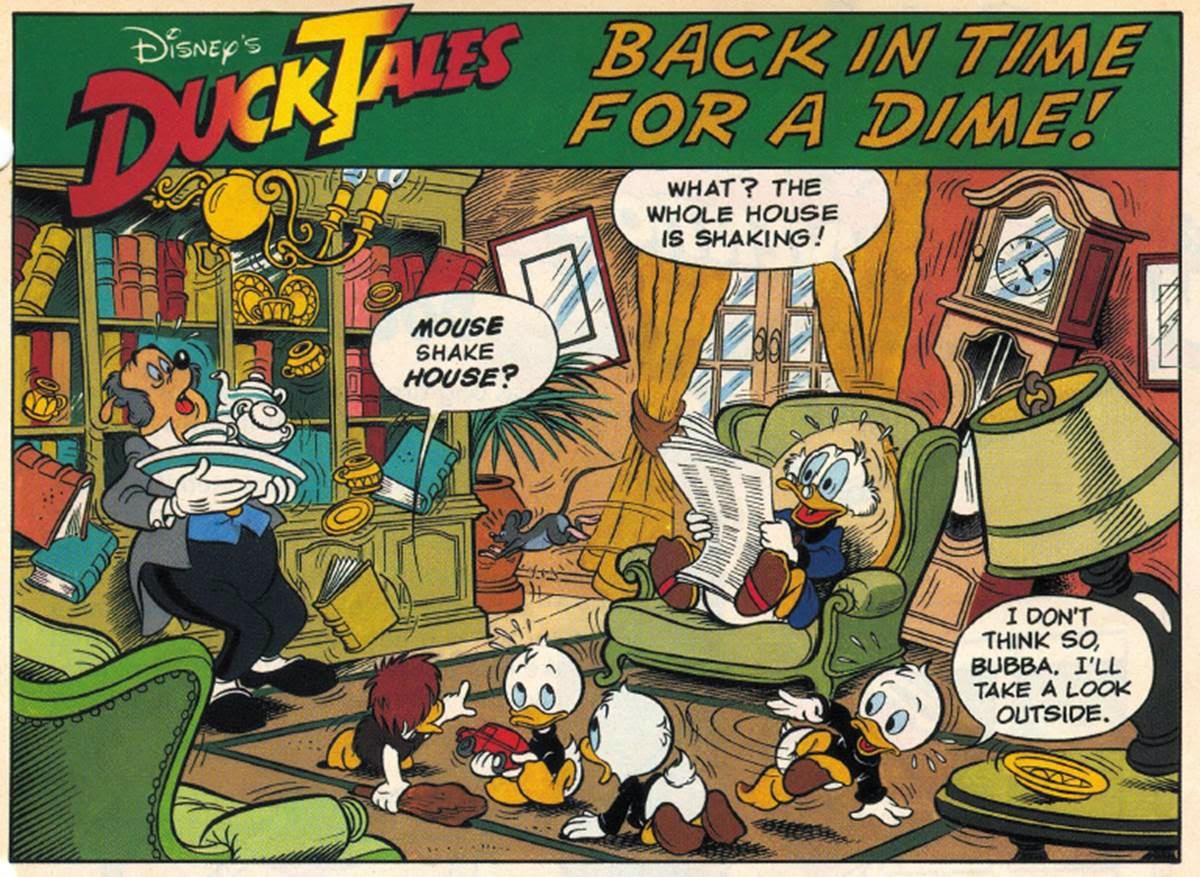 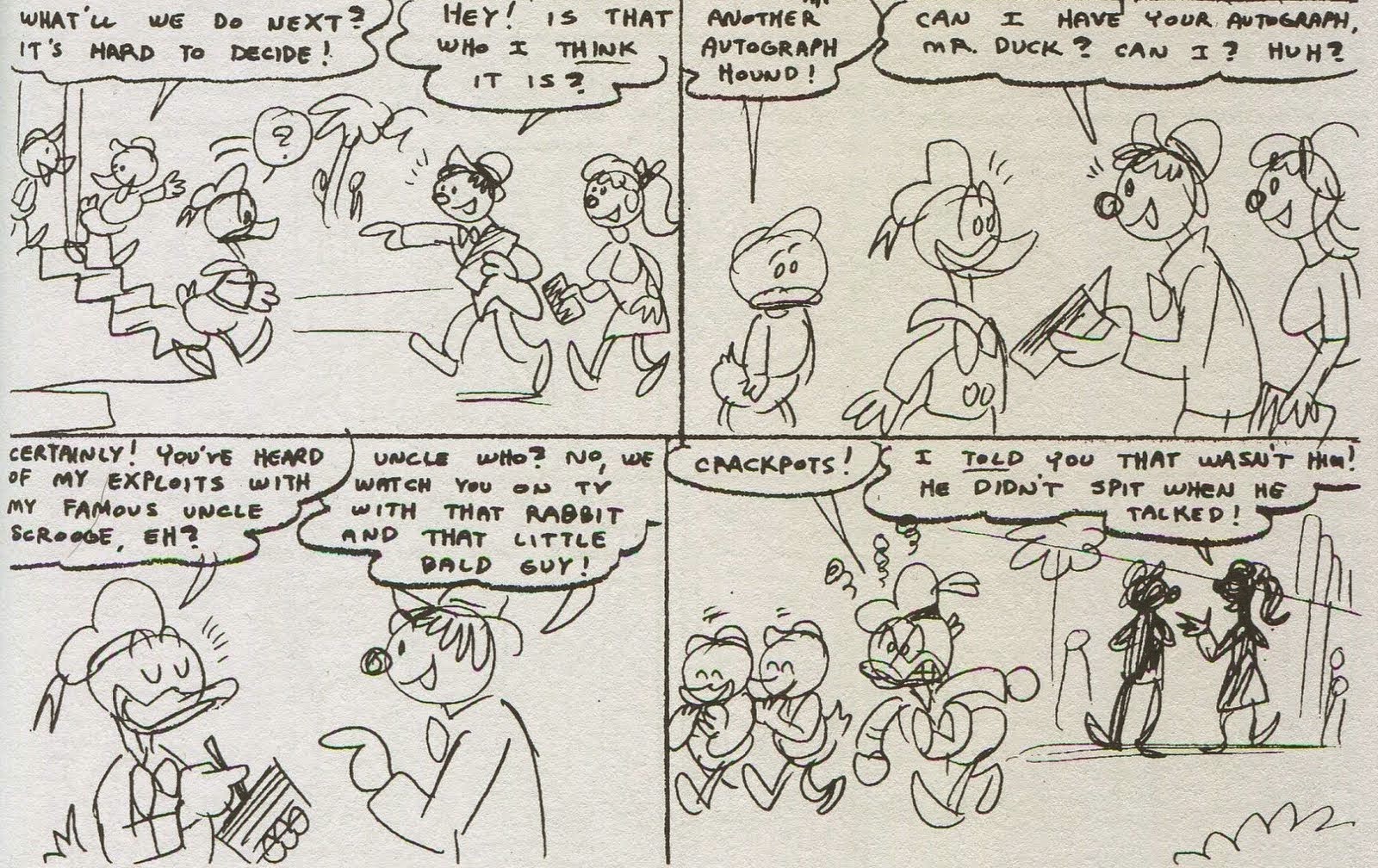 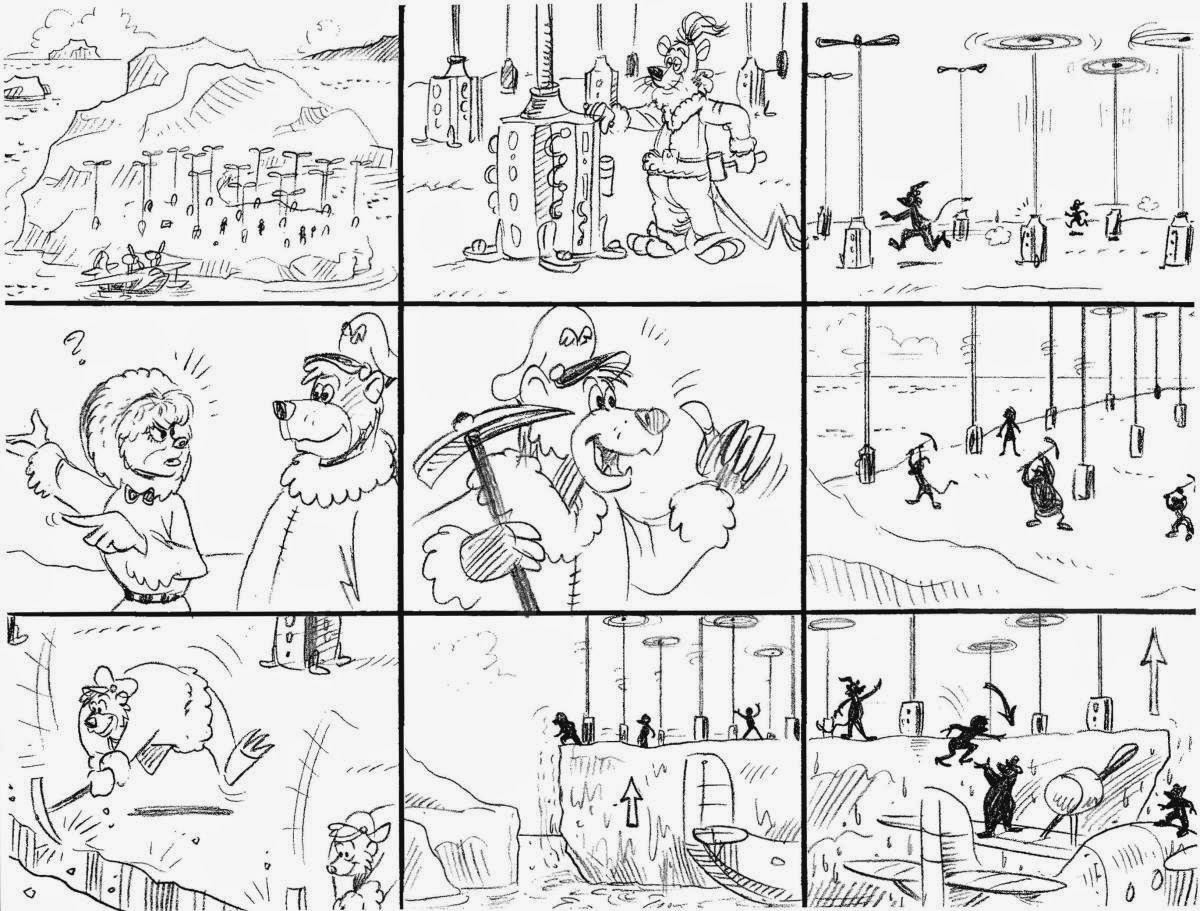 The collection concludes with Rosa's early contribution to the brand-new Disney Comics line, "The Money Pit" (Disney DONALD DUCK ADVENTURES #1, June 1990).  It's pleasing to learn that Rosa produced this story, the script of which had originally been rejected by Gladstone, as a "good-faith work" in support of editor Bob Foster, to indicate that Rosa would still be willing to work directly for Disney Comics if the artwork-return policy were changed.  There's quite a bit of "soapbox scaling" in this story, with Rosa putting his own complaints about the silliness of comic-book collectors into Scrooge's beak, and a "Donald repentance" scene that's somewhat more "squishy" than the norm (HD&L even add an extra *snif* for good measure!).  But this tale has never looked better -- those ugly blue pupils of the Disney Comics printing are gone -- and it's probably the best of the short stories that appear here.  Surely, Donald is entirely to blame for the near-disaster that results from his greed-fueled course of action... unlike, say,  "The Curse of Nostrildamus" (UNCLE $CROOGE #235, July 1989), in which he is a pure victim of the titular torment.  Unfortunately, there would be many, many more victimizations of the "Nostrildamus" variety to come for Donald in Rosa's future stories.

Great post, Chris! Though I was aware of Rosa's career taking several detours and roadblocks, I never quite "connected the dots" of that time. There was some sharp pacing and conservation of dialogue, especially "His Majesty McDuck" which I think is one of the best original (non-sequel/Lo$) stories Don ever produced.

The TaleSpin storyboard is equally delightful to see—one has to wonder what Mr. Rosa would have cooked up for WDTVA if given a chance to pitch an animated show? But we're richer for having his career steer back to duck comics, especially now that they're being so lovingly collected and curated by the fine folks at Fantagraphics.

Thanks, too for linking to the "Implosion" post: I'm getting the Epilogue portion together now, with some surprising new connections to current events! – Dan