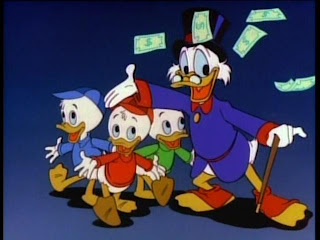 My ducks are finally in a row (eeeshhh!) to begin my version of the DuckTales 25th anniversary retrospective.

I've spent a fair amount of time thinking over exactly how I am going to approach this daunting project.  I mean, this IS a pretty hard act to follow... 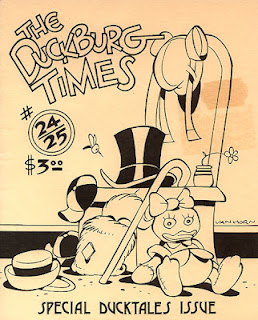 ... and I'm not indulging in baseless chest-thumping when I say that.  Joe Torcivia and I labored mightily to lick that thing into shape, and getting the FULL, 100-episode-version of the project into print required even more effort.  Judging by the continuing interest in the DUCKTALES INDEX -- I received an e-mail request for information about the full INDEX just a few weeks ago! -- I think it is safe to say that Joe's and my efforts have stood the test of time reasonably well.  When the whole project wrapped, I couldn't imagine that I'd have anything further to say about the series.  20-plus years, four Disney comics publishers, a more extensive immersion in Duck fan-culture, the decline and disappearance of the "Silver Age of TV Animation" that DT arguably birthed, and the invention of the Internet (thanks, Al -- I think) tend to give one a slightly different perspective, however.

One of the first decisions that I made was to try to revisit the episodes in production, rather than broadcast, order.  This information simply wasn't available in the early 1990s, unless you happened to be one of the fortunate few who were privy to DT "bible" material.  It's still quite difficult to find today, with folks either (1) mistaking the original broadcast order for the original production order or (2) claiming that the DVD releases had the "true" production order, partially because the multi-part pilot adventure "Treasure of the Golden Suns" didn't appear until Volume 2.  Neither claim is correct, and, in retrospective, Joe and I should probably have done a better job of relating what we originally saw as differences in directorial style (e.g., the "restrained" approach of Alan Zaslove, Steve Clark, and David Block vs. the "rubberier" style of Terence Harrison) to the simple fact that the series took a while to settle on a more or less "standard" visual approach during its first season.  The fact that most of the adaptations of Carl Barks stories displayed a "restrained" look had less to do with the fact that the directors were consciously using a more conventional style to mount these "classic" stories and more to do with the fact that the writers -- naturally enough, given the series' origins -- were working on (most of) the Barks adaptations at the very beginning, when the kinks of the show's visual style were still being worked out. 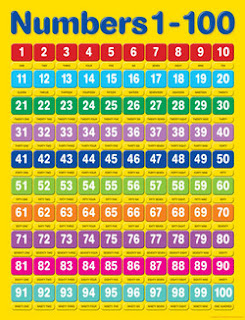 Thankfully, I've been able to mine several reference sources and compile a production-order list that, while it is not completely accurate (for reasons described below), is certainly very close to the truth, given the evidence provided by the series itself.  Many of you may not have seen this list, so I'll reproduce it here... both as a public service and as a heads-up to let you know the order in which I'll be tackling the eps.

For reasons of convenience, I combined the second part of Season Two (by which I mean, the Fall 1989 episodes that followed the debuts of Bubba Duck and Gizmoduck, which were originally broadcast in "two-hour movie form" during the Fall of 1988 and the Spring of 1989, respectively) and Season Three (which included both Season Two episodes held back for the launching of the Disney Afternoon block and eps produced post-DuckTales the Movie: Treasure of the Lost Lamp).  I also admit to chiseling just a wee bit regarding the placements of the episodes marked * in Season One.  My production order information indicates that the individual episodes making up "Treasure of the Golden Suns" and "Catch as Cash Can" were NOT produced in sequence.  Rather than split up the chapters, I simply shifted the intervening eps to appropriate positions after the conclusions of the serials.  Got all that? 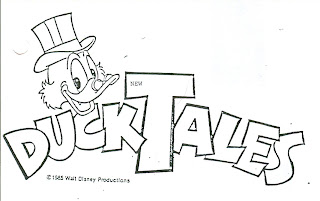 An early (1985) version of the "DT" logo, before the creation of the "back-atcha" homage to
"Raiders of the Lost Ark" that we all know and love

As for my planned approach to the discussions of the individual episodes... well, I would guess that most people who will be reading this are at least tangentially familiar with the series, so I'll try to make plot recaps as succinct as possible.  Then, I'll move on to my own reassessments of the eps and -- this is where the fun really begins (see what I did there?) -- tackle the expressed opinions of others.  Thanks to GeoX, Greg Weagle, and Pete Fernbaugh (when his broadcast-order approach and my production-order approach get into phase, that is!), such opinions are now readily available out in the ether, where, in all honesty, DT has been woefully underserved over the years.

My current hope is to do one of these entries per week.  I wish I could maintain a more sprightly pace, but I am more than aware that the demands on my time during the academic year (and the period of time leading up to it) will be considerable.  Plus, just as with my earlier Kimba project, I want to give these entries the care and consideration they deserve, and that will require a fair amount of spadework... especially since I'll be doing cross-referencing to other folks' postings.

One thing that you will NOT see during the course of this project is any attempt to do postings of YouTube versions of the episodes.  I was barely able to make it through Kimba using "secondary sources" and am all too aware that YouTubes of Disney TV episodes, pop up though they do on regular occasions, are an open invitation for the Disney lawyers to indulge in their favorite pastime of "Whac-a-Mole."  As Pete Fernbaugh appears to be doing at present, I'll generally use still pics from the eps (augmented by any other visuals of interest that I've accumulated and digitized over the years) and let it go at that.  I will, however, unbend myself to the extent of posting a couple of video reviews of the series.  What the hey, to get you in the right mood for what's to come, why not conclude with those, right here and right now?

First, we have a two-part review of "Treasure of the Golden Suns" by someone styling himself "graphicnovelguy." The presentation isn't up to Nostalgia Critic standards, to be sure, but you really have to love the way in which this guy becomes... um... stimulated as the dramatic events of "Too Much of a Gold Thing" come to a head.  I can remember being greatly excited by the two-hour version of "Golden Suns," as well, but I was already frothing away long before the golden temple went down the tubes.

And let's give TNC his due props -- not to mention many thanks for those kind comments at the end -- by posting his take on "Golden Suns":

Congrats and a big “WELL DONE!” on the beginning of your DT tribute series!

If there was one thing that was sadly too-far-ahead-of-its-time (besides Freakazoid!), it was our DuckTales Index. If only we were able to create it using technology that would allow us to share it with others today.

To Chris’ readers, I must say that preparing that Index with Chris was one great experience! Often, I cannot tell exactly who wrote what. But I DO remember that we did it all through the mails! Imagine that! This may have been the last gasp of old-school fandom!

Between your project and Pete Fernbaugh’s, it’s gonna be a FUN SUMMER – temperatures and power supplies willing, of course!

And heck, Chris… Let me make a first announcement HERE on your Blog of an upcoming love-labor of my own:

No, I’d never compete with Chris and Pete for DT Supremacy, at this point.

But, sometime this month, you can expect from me and TIAH Blog a 50th Anniversary tribute to GOLD KEY COMICS!

I’m working on it now – both the good and the bad – and profusely illustrated.

It’s not a history of Western Publishing. I think only Mark Evanier could attempt that! But it’s my lengthy view of the “wonders” and the “wonder whys” of Gold Key, 50 years after its birth.

I hope you enjoy it, even a fraction as much as I’ll be enjoying “The Summer of DuckTales”!

Which will last longer... my DT retrospective or my (current) kidneys?? Here's hoping the latter, by a good margin.

You certainly are well qualified to handle a Gold Key retrospective. Will be looking forward to that!

We’re ALL for the latter, Chris! …And, to that end, we’d like DT to go on forever!

Gold Key’s 50th will only be one LONG post. But, I hope you’ll find it a good one!

Though I'd ideally, and would love to, write more, time is not infinite ... and as this post is already a couple days ago, I'll just post a quick note to say that it's outstanding. You're in top form -- DuckTales has always seemed to bring out a certain passion and quality of work in you (not that your writings on other subjects are lacking). It's as if, nearly two decades past The DuckTales Index, and because of the developments that you cited, you're taking on the whole series all over again, but with completely revitalized thoughts, observations, and opinions.

It's not a remake or a director's cut, but some sort of sequel ... well, it will be a series of updated and comprehensive notes, essays, and other writings that, together, are so thorough and original, will be able to (metaphorically) stand side-by-side with the original, complementing it and bringing it current.

Joe: count me in as looking forward to your Gold Key retrospective!

I for one fondly remember receiving that Duckburg Times issue when it was released, so thanks a million for that. And I too, Joe, will surely look forward to your Gold Key post the coming week!

Today is Sept 18th! I wanted to say I'm a proud owner of a copy of the Duckburg Times #24/25 and I absolutely love the work you guys did on it it!

For this 25th anniversary, I wanted to contribute to the celebration and I offer my own comparatively meager article on the subject. I hope you guys won't laugh me out of existence.

I read your article and enjoyed it! I will discuss it in an upcoming post and make comments.

I know that the first run of the two-hour version of "Golden Suns" was 9/18/87, but it was ALSO broadcast at other times during that weekend, depending upon the station. Two stations carried DT in the area where I lived -- TV 38 in Boston and, I believe, WPIX in New York -- and I also caught "Golden Suns" on either Saturday or Sunday, I can't recall which at the moment.