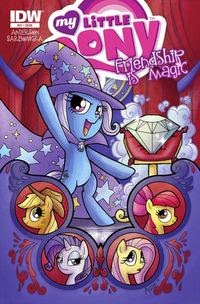 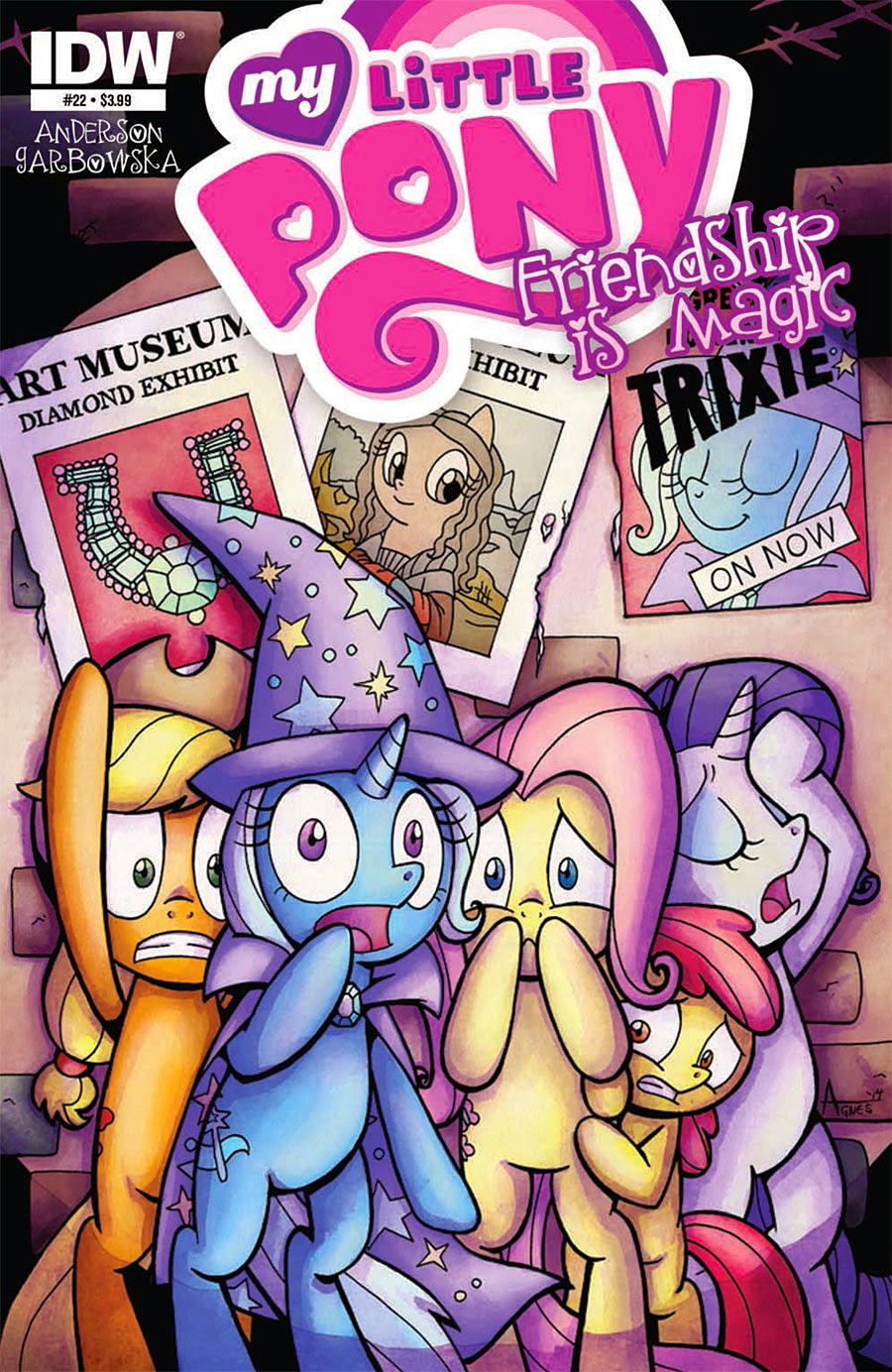 "Manehattan Mysteries" finds Applejack, Apple Bloom, Rarity, and Fluttershy visiting the great Equestrian "mare-tropolis," where they encounter "The No Longer So Great but Still Relatively Powerful" Trixie attempting to make a living as a stage performer... and, as we quickly learn, an ally of the local police in their attempts to catch a jewel thief.  Trixie's somewhat soiled reputation comes back to bite her in the plot when a valuable jewel is found in her possession.  Can our friends -- aided by Apple Bloom's cousin, Babs Seed -- clear Trixie's mane, er, name and solve the mystery?

I really liked the way in which writer Ted Anderson worked Babs, making her first appearance in comics here, into the story.  A reformed bully thanks to the events of the TV episode "One Bad Apple," Babs has received surprisingly little attention since then in any medium, a rather peculiar thing, given that (1) Babs would seem to be an ideal appendage to the Cutie Mark Crusaders, and (2) her residence in Manehattan provides a good jumping-off point for any number of future stories set in the big city.  Anderson almost overcompensates for this lack of love by using Babs as the catalyst who turns "similarly reformed villain" Trixie to the side of good AND the smartyhooves who solves the mystery.  I suppose that Babs could be considered hard-boiled enough by nature to qualify as a gimlet-eyed junior detective, but her sudden emergence as a comprehensive problem-solver here still strikes me as a bit overly convenient, though nowhere near as "WTF??"-worthy as Webby's mutation into a self-righteous scold in "Rightful Owners."  It's also hard to say how any future appearances of Trixie on the TV show are going to be made to square with the sorceress' apparently complete turn to the side of good here.  (And, yes, I do take consistency of continuity between the TV series and the official comics line seriously... the more so after seeing such continuity treated far more roughly by various iterations of Disney Afternoon-based comics.) Even so, this is a well-constructed story and a generally fun read.

I've had something of an issue with Agnes Garbowska's artwork ever since she appeared on the MLP comics scene.  Her latest effort here can fairly be said to have tested my patience.  The chunky, storybook-style artwork has not changed much.  What bothered me about this particular production was the huge, even excessive, number of panels in which characters directly face the (supposed) audience.  I've been in Greek Orthodox cathedrals that had far fewer icons.  Admittedly, the face-on frenzy is consistent with Garbowska's book-illo-flavored overall approach.  The problem is that getting the same point of view, over and over again, in a two-part story hammers home the theme of LAZINESS far more than it does artistic integrity.  I'll give Agnes the benefit of the doubt on this latter contention, but here's some friendly advice: Evidence of a bit more ambition in your next story would be welcome.
Posted by Chris Barat at 3:34 PM
Labels: Christianity, Disney Afternoon, Disney comics, DuckTales, General Comics, MLP:FIM