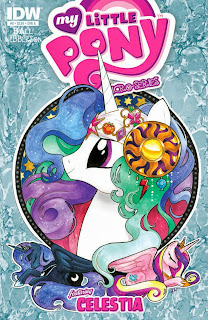 After feeling their way through the issues devoted to the "Mane 6," the merry minions responsible for the MICRO-SERIES title really seem to have hit their stride.  First came a Cutie Mark Crusaders issue of surprisingly high quality; now we are gifted with something even more remarkable, a first-rate story featuring Princess Celestia. In order to get the job done, writer Georgia Ball and artist Amy Mebberson had to swim upstream while battling a whole host of "neigh-sayers" in the MLP fan base who've long dismissed Celestia as a manipulative, personality-challenged, "too-perfect-to-be-true" god-ruler.  By keeping the central story simple and humble AND permitting the ruler of Equestria to display her tougher, more physical side in a flashback battle scene, Ball and Mebberson cover all the necessary bases: they show a ruler who can get her hooves dirty when necessary and also display fierce loyalty to a beloved subject, even in the face of some social disapproval.

Celestia defending an elderly, paranoid, increasingly-out-of-touch teacher who's become the laughingstock of "Celestia's School for Gifted Unicorns"?  What's the pony equivalent of, "You had me at hello"?  Once again, Canterlot society is shown to be a rather hard-edged place, as the aging Inkwell, who once helped Celestia fight off an invasion of... um, somethings, is now being routinely mocked by parents and students alike (including, sorry to say, a trio of red, blue, and green-hatted little ponies who are obviously meant to evoke the "color-coded" Nephews of DuckTales -- or at least a somewhat-ruder-than-normal version of same).  At the hearing which will decide Inkwell's fate, Celestia reminds those in attendance of how the old teacher helped them in the past and more or less manipulates them into allowing Inkwell to retire on her own terms.  Yes, I said "manipulates" -- only here, the reader is not likely to react in the same manner that a lot of Bronies did when Celestia proclaimed that Twilight Sparkle was "ready to fulfill her destiny" (and transform into an Alicorn Princess) in the TV episode "Magical Mystery Cure."  This is a broader version of Celestia's famously solicitous treatment of her prize pupil Twilight; it illustrates the princess' great concern for all of her subjects, even ones who have long since given their best to Equestria.

Sabrina Alberghetti's fine cover is a little "dated" in that it displays the "three princesses of Equestria" -- Celestia, Princess Luna, and Princess Cadance -- while leaving Princess Twilight Sparkle out.  Well, I think that that little omission will be well and truly corrected once season four begins.  I do, however, have to ask: Why is Princess Celestia not Queen Celestia?  Once Luna went over to the "dark side" and became Nightmare Moon, leaving Celestia with the responsibility of raising both the Sun and the Moon, wouldn't Celestia have become Queen by default?  Oh, I know the answer: Princesses are "cute," "cool," and eminently marketable, while Queens are not.  It still seems to me as if Celestia has reason to complain.
Posted by Chris Barat at 8:30 PM
Labels: Animation, Disney Afternoon, DuckTales, General Comics, MLP:FIM, Movies