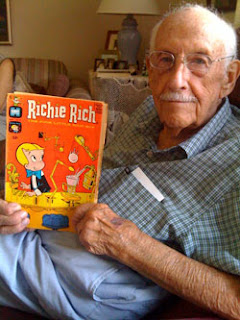 I really should have checked in a little sooner with my reaction to Mark Arnold's report of Sid Couchey's death. Blame the travails of real life. I was fortunate enough to get to speak with the old LITTLE DOT and LITTLE LOTTA master (well, if anyone was indelibly associated with those gals, then Sid certainly qualifies, the relative paucity of Couchey stories in Dark Horse's HARVEY GIRLS collection notwithstanding) and am glad that he finally began to get some recognition for his long service to Harvey Comics towards the end of his life. Of course, befitting the long history of screwups and gaffes that seem to plague all "official" Harvey projects, the professional bouquets didn't come without their share of thorns. Witness Ape's butchering of Sid's last name and inexplicable confusion of his art style with that of Ernie Colon in the recent VALENTINE'S SPECIAL! issue.

I only occasionally wrote about Couchey's work in my RICHVILLE RUMINATIONS column for THE HARVEYVILLE FUN TIMES!; he did a fair number of RICHIE RICH stories, but not a lot of adventure tales, which tended to be my focus. But one of his rare long RICHIE stories made such a marked impression on me that it was one of the first adventures I discussed in considerable detail. I already mentioned it in my previous Couchey-related blog entry, but, in tribute to Sid, here's my complete writeup on "Crash Landing" (RICHIE RICH #43, March 1966), freely adapted from my original article in THFT! #15 (Summer 1994). After reading my piece, I think you'll appreciate my observation that this tale "seems to inspire a weird fascination in those who learn about it." The specific feelings of fascination that are felt will be, of course, up to the nature and beliefs of the reader. 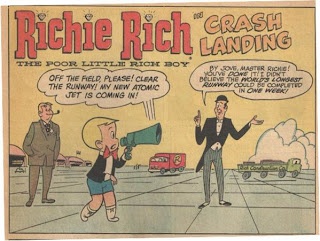 When Richie's new "atomic jet" crashes on poor, desolate, Communist-bossed Port Atlantic Island, Richie and his crew (faithful butler Cadbury, tough-guy pilot Bull Dolan, Chef Pierre, and a few Rich Aviation grunts) are taken prisoner by "the people," a.k.a. a wild-haired, nasty, Moscow-trained ideologue named Quagmire, who has the "Republic"'s ineffectual President Belden under his thumb. Richie and friends seem up against it, but, at a show trial, they quickly win the hearts of the people by proudly describing their lives in America. Richie's employees boast of the possessions and rights that "working men" can have in America, while Richie praises his great, "far from rich" friends Gloria, Freckles, and Pee-Wee. Not satisfied with merely justifying the capitalist lifestyle, Richie proposes that the islanders build a dam to catch rainwater for their crops, using the gunpowder that Moscow had sent the island to protect it from "imperialists." In the course of the dam-building, Richie shows his character by (1) saving a young man from a fall off a cliff and (2) cheerfully dancing with a peasant girl, who is amazed that someone so rich would do such a thing. The fulminating Quagmire determines to foil the dam plans, using characteristically Orwellian phrasing to justify the deed.

The bad guys are caught and thwarted and are sentenced to be shot as traitors, but Richie pleads for clemency, drawing a remarkable confession of guilt out of Quagmire -- which leads to the ultimate establishment of a newly democratic country: 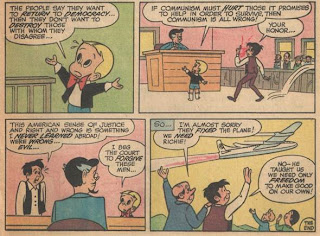 "Simplistic and cliched!" Of course. But I think that this tale shows exactly why Richie is such an appealing hero in his adventures. Throughout, he displays courage, compassion for others, and quick thinking and helps the Port Atlantic Islanders penetrate the cliches of propaganda by demonstrating that capitalism doesn't inhibit the growth of character. Notably, he does not even mention his own vast wealth during the court-trial scene; his main concern is how Communism affects others.

The pilot Bull Dolan provides a humorous counterpoint to Richie's earnestness by displaying a "hit 'em in the gut" approach to confronting the Reds. Not that Bull actually does any real fighting; his "combat" is pretty much confined to verbally sticking up for his boss Richie and his fellow crew members. In the funniest scene of what is a pretty poker-faced story, Bull slaps down the well-meaning, but weak-kneed, Belden's claim that "you have given the lie to Red propaganda... yet the idea of Communism still sounds good to us" with a sarcastic "Born losers, eh, Mr. President?" Even Richie calls Bull out for that crack, but it's hard not to chuckle at its comical straightforwardness. Couchey's RICHIE, DOT, and LOTTA tales very rarely included memorable one-shot characters, but Bull is one of the very best.

The weirdest thing about "Crash Landing" may simply be the bare fact that Couchey drew it. His minimalist, stylized artwork, which works just fine for five-page gag stories, would seem to be out of its element in the service of a tale like this, yet Sid somehow manages to pull it off. The simplicity of the artwork seems to complement the earnestness of the story line in a most unique manner. Anonymous and frequently patronized Couchey and his fellow Harvey artists may have been during their primes, but the "classic" Harvey titles are chock-full of intriguing little gems like these.