Bob Langhans' justly famed seven-part epic, which ran in Disney Comics' DUCKTALES title from December 1990 until the middle of the following year, finally gets the one-volume graphic-novel treatment it's so long deserved... in a manner of speaking. Publication of this issue was delayed, and the wait turns out to have been hardly worth the trouble, as Gemstone's packaging bears all the earmarks of a rush job. Pages six and seven of Part Three, "The Once and Future Warlock," are reversed, and splotchy, mottled coloring mars the presentation in several places. Most disappointing of all, absolutely no ancillary material is featured -- not even an explanation of who Bob Langhans is, much less why his story set the standard for adaptations of the DuckTales TV series to comic-book form. Even Marv Wolfman got to speak his piece in a foreword to the previously published (and inferior) "Scrooge's Quest." The missed opportunity is a real shame, as Langhans' story proved to be the first truly successful serialized Duck tale, a key precursor to Don Rosa's THE LIFE AND TIMES OF SCROOGE McDUCK and similar projects down to the present day.

How well does "Odyssey" hold up almost two decades later? Well, it's a decent Duck adventure, but an outstanding DuckTales adventure -- and the distinction is important. Disney Studio stories in the late 1980s based on the TV series were uninspired finger exercises. John Lustig and Bill Van Horn did far better by the characters in their series of stories for "Gladstone I," but those tales were sui generis, full of quirky humor, and, for all their high quality, not really reminiscent of any TV episode. "Scrooge's Quest" captured the broad outlines of the show, but was totally lacking in the finer details, most fatally in the area of characterization. Langhans' plot can be faulted in places, but his characterizations are spot-on from panel one (and not just because Scrooge drops the occasional Scottish-ism, either). Launchpad is particularly well captured, issuing a steady stream of believable one-liners and exuding that recognizable McQuack bravado. Scrooge and Flintheart Glomgold are equally well realized. Even the Nephews sound as they "should" in the DuckTales context, making references to monster movies, rock videos, and similar stuff. Read Langhans' dialogue, and you can bring the voices of Alan Young, Terry McGovern, Russi Taylor, and Hal Smith to mind with no effort at all. 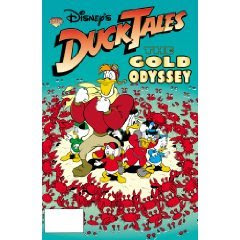 Langhans' decision to end each part of the serial with a cliffhanger was an inspired idea that paid off handsomely; it's still the most memorable aspect of the story. More subtly, Langhans ups the danger quotient across the board. The evil Druid who temporarily takes possession of Doofus' soul in "The Once and Future Warlock" should have been so lucky as to suffer the fate of El Capitan in the TV series' "Treasure of the Golden Suns." Rather than being doomed to search for treasure forever, the nasty necromancer gets buried in a cave-in -- and he's not digging his way out anytime soon! An alien monster conks out after flying out of the atmosphere and into space in pursuit of our space-traveling friends. Glomgold is left to die in a malfunctioning spacecraft by space pirates and later narrowly escapes being stranded on an alien planet. Huey appears unconscious with blood on his forehead, for crying out loud (he later claims that he was faking it, but I don't buy it, somehow). The TV series rarely played this rough, but it works superbly on the comics page. (The Jaime Diaz Studio artistically renders every scene in its standard straightforward, literal fashion, which somewhat undercuts the tension in places.)

For all the story's good points, I get the distinct impression that Langhans improved generous chunks of his plot. The true "core" of the story -- Scrooge, Launchpad, and HD&L's voyage into space to rescue Glomgold, who'd been attempting to locate a "golden moon" that had showered Earth with chunks of the valuable stuff from the Arctic to England -- doesn't begin until Part Four, and it ends at the beginning of Part Six. The early battles against a pack of Arctic poachers, a gaggle of rather unpleasant, tradition-obsessed natives, and the devilish Druid are interesting enough, but the presence of Doofus (beginning in Part Two), in particular, seems somewhat contrived. Not that I begrudge Doofus his one moment of genuine four-color glory after eons of either being patronized or mischaracterized (as a Junior Woodchuck troop leader in Vic Lockman's stories), but, after he suddenly appears in Gyro's lab, accompanies the gang to New Swampadonia, and is rescued from the Druid, he... uh, completely vanishes from the story. Wouldn't he want to see the full adventure through after all that? (Maybe he remembered his bad experiences during the trip-to-Mars TV episode "The Right Duck" and declined the space jaunt on principle.) The space-jinks are great -- and "junk collector" Captain Finna, alien innkeeper Ito, and ruthless rat-oid pirate Omio Rexx are all excellent supporting characters -- but Part Seven returns us to Duckburg for a somewhat-less-than-riveting battle between Scrooge and the Beagle Boys that links into the epic's "hunt for gold" theme in a particularly far-fetched way. Even the cliffhanger to end Part Six (with the splashed-down Ducks about to be run over by a *gulp!* speeding ocean liner!) is a downer. Just a little more focus on Langhans' part could have made this story truly great and fully worthy to stand with Barks, Rosa, and the other masters of the four-color form. Nevertheless, it's still an ideal encapsulation of the qualities that made DuckTales so wonderful.  For that alone, it deserves to be cherished by Duck comics fans of all persuasions.
Posted by Chris Barat at 9:07 PM
Labels: Animation, Carl Barks, Disney Afternoon, Disney comics, Don Rosa, DuckTales, John Lustig, Vic Lockman, William Van Horn